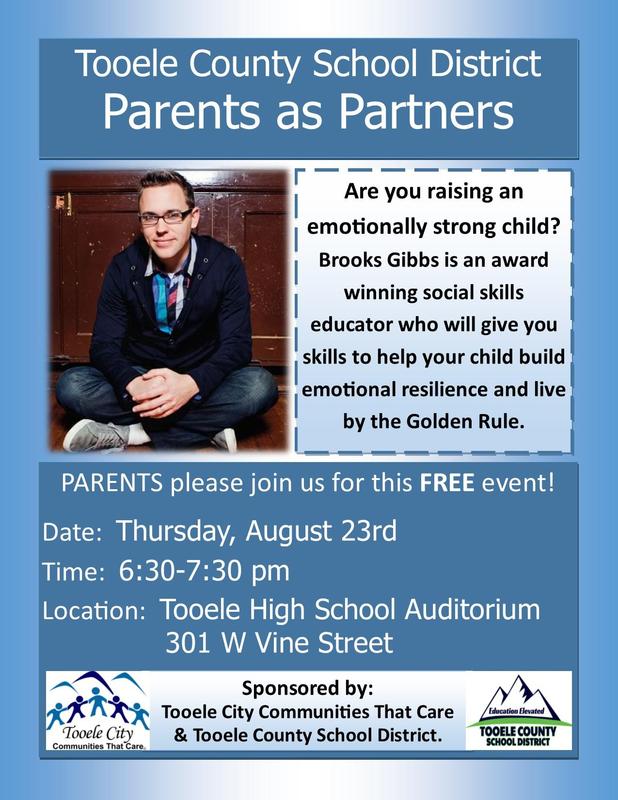 As part of the Parents as Partners program, Brooks Gibbs, a popular author/speaker will be teaching parents about emotional resilience, self confidence, and drug and alcohol resistance. The event is free.

Tooele City Communities That Care in partnership with Tooele County School District will welcome Brooks Gibbs as 2018’s prevention assembly speaker as a kickoff to the Second Step and Life Skills Training curriculum.

Brooks Gibbs grew up in Littleton, Colorado.  As a child he was smaller than his peers and was constantly bullied.  He relates first hand to the emotional damage and distress one feels in similar situations.

Gibbs began writing and speaking on the subject of bullying in the aftermath of the Columbine shooting that took place in his hometown of Littleton, Colorado.

In an effort to stop bullying in schools, Brooks teaches techniques and strategies to empower the victim to be resilient to what bullies say to them.  Brooks believes that, if people want to be happy in life, they need to be self-confident in believing that they are not going to allow hatred to affect them and let it roll off.

Brooks graduated from Horizon University San Diego in 2005 with a degree in Pastoral Counseling.  He then went to San Diego State College where he spent 2 years studying communication and media studies.

In 2010, Brooks Gibbs published his first book, Love is Greater Than Hate.  Gibbs was the content producer for several television projects, including Teen Trouble on Lifetime and Bullying Diaries on Comcast On-Demand.  He has been featured in Teen People Magazine, The Washington Post, and interviewed on CBS.

Parents are encourage to attend this free event.