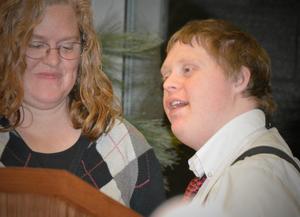 si·lent /sīlənt/
• Unspoken
• Unexpressed
• Unvoiced
Through a collaborative effort from Tooele County School District and Vocational Rehabilitation a student is no longer silent.
Robbie Cox currently works at the Tooele County School District offices and is non-verbal. With deliberate and purposeful planning Robbie has been supported on the job through the Tooele County School District’s transition team that consists of teachers, para-educators, and related service providers. These team members assisted Robbie in developing communication and social skills allowing him to make voiced choices, express himself through jokes, and have two-way conversations with co-workers using a communication device provided through special education.

During the 2018 Christmas break, Robbie turned 22 years-old and reached maximum age for special education services. The transition team saw the need for him to proceed in developing his communication skills and be able to interact with co-workers while on the job. It became clear that Robbie would need his own communication device in order to see continued progression. The first step would be to explain the situation to his parents and ask if they would put in a request to Vocational Rehabilitation.

Robbie’s parents believe their child can be a productive member of society and recognize that his ability to work gives him purpose. They were more than willing to help facilitate this process and their expectations proved to be helpful in this collaborative effort

After Robbie and his parents met with the Vocational Rehabilitation representatives, the TCSD transition team submitted a proposal based on data and supports already in place. The proposal also suggested a sensible device that would allow on-going progress and be easy to use by Robbie and his family. Vocational Rehabilitation not only agreed to purchase a new communication device, but stated they would provide the same device Robbie had already been receiving training on.

Robbie received his device the second week of January and has continued his job placement with Tooele County School District with job support provided through The Division of Services for People with Disabilities.

This project helped deliver seamless support going from school to adulthood. Robbie will continue to learn the value of voice. He is no longer silent.