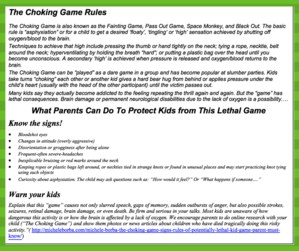 The school district received a tip that students are playing the “choking game." We are very concerned about this activity and ask that parents talk with their children about the hazards of participating in this type of "game." We want to keep all our students safe from harm and this game poses a risk to their well being. If you would like more information, please contact the district office Safe Schools department or your school’s administration.

The Choking Game is also known as the Fainting Game, Pass Out Game, Space Monkey, and Black Out. The basic rule is “asphyxiation” or for a child to get a desired ‘floaty’, ‘tingling’ or ‘high’ sensation achieved by shutting off oxygen/blood to the brain.

Techniques to achieve that high include pressing the thumb or hand tightly on the neck; tying a rope, necktie, belt around the neck; hyperventilating by holding the breath “hard”; or putting a plastic bag over the head until you become unconscious. A secondary ‘high’ is achieved when pressure is released and oxygen/blood returns to the brain.

The Choking Game can be “played” as a dare game in a group and has become popular at slumber parties. Kids take turns “choking” each other or another kid gives a hard bear hug from behind or applies pressure under the child’s heart (usually with the head of the other participant) until the victim passes out.

Many kids say they actually become addicted to the feeling repeating the thrill again and again. But the “game” has lethal consequences. Brain damage or permanent neurological disabilities due to the lack of oxygen is a possibility.

What Parents Can Do To Protect Kids from This Lethal Game

Explain that this “game” causes not only slurred speech, gaps of memory, sudden outbursts of anger, but also possible strokes, seizures, retinal damage, brain damage, or even death. Be firm and serious in your talks. Most kids are unaware of how dangerous this activity is or how the brain is affected by a lack of oxygen. We encourage parents to do online research with your child and explain to them the dangers and how children have died tragically doing this risky activity.”(http://micheleborba.com/michele-borba-the-choking-game-signs-rules-of-potentially-lethal-kid-game-parent-must-know/)