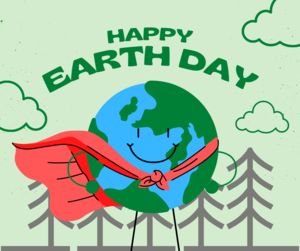 According to Earthday.Org, on April 22, 1970, 20 million Americans protested for a healthy, sustainable environment. By the end of that year, the first Earth Day had led to the creation of the U.S. Environmental Protection Agency and the passage of the Clean Air, Clean Water, and Endangered Species Acts. Fifty-one years later, the annual Earth Day celebration continues. Earthday.Org’s theme for this year is Restore Our Earth. It focuses on natural processes and emerging green technologies that can restore the world's ecosystems.

The District’s Energy Management Program has not only improved the amount of energy used each day, but also helped save on operation costs. The program has saved the school district more than $300,000 last year.

“Since the program started in 2008, there has been a savings totaling more than $8 million in cost avoidance,” said Ryan King TCSD Energy Management specialist. “The conservation program has reduced the total overall energy use by nearly 623,000 MMBtu. That is equal to 41,600 metric tons of carbon dioxide removed from the atmosphere, which is equivalent to 8,600 passenger cars not driven for one year or more than one million tree seedlings grown for 10 years.”

“Despite all our efforts, the fact is, the availability of water is extremely limited this year, so we will be limiting how much we water our green spaces through the summer,” said King. “This doesn’t mean we are letting the lawns die, they just won’t be as green as they normally are.”

Because there are thousands of sprinkler heads spread throughout the school district, sometimes a broken or misaligned sprinkler head may get missed during off-duty hours, resulting in wasted water. The District Operations Department is requesting the public’s help in reporting a concern if they see sprinklers on school grounds that are wasting water. Please email [email protected] with the school and location of concern.

The District Custodial Department uses the Environize System that creates an environmentally safe product called Anolyte. Anolyte is the product used throughout the school district to disinfect and sanitize surfaces. It also has a biproduct called Catholyte which can be used to clean carpets. Both biproducts are electrically-charged water, making it safe for the environment and our students and staff.

In the past, the Tooele Education Foundation, with the sponsorship of Cargill, purchased and planted trees throughout the school district. This year, they went a different direction and focused their efforts in the classroom. The Tooele Education Foundation purchased aquaponic systems for third-grade classrooms. With the new additions, students have learned about environmentally-friendly ways to grow food.

These are just a few of the things TCSD does to hep protect our planet. Families can also celebrate and protect the Earth through simple, daily habits such as planting a tree, conserving water, recycling, or reusing products, turning off the lights, picking up trash in the neighborhood and more.

For more information about Earth day, go to www.Earthday.org