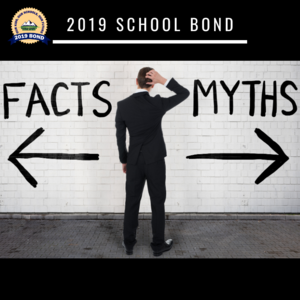 There has been a lot of information on different social media sites throughout Tooele County regarding the school bond. Click the title to read about the Top 10 Myths & Facts.

Myth 1: Funds from the bond will be used to increase wages for District Administrators.

Fact 1: Funds from the bonds can only be used for the projects outlined by the school board in the voter information pamphlet. The projects listed are one new high school, one new junior high school, one elementary school and security upgrades to existing schools.

Fact 2: Although the ballot language first states the tax increase would be $346 per year for a home valued at $250,000, it further explains new bonds would be issued as old bonds are paid off. Thus, the increase is actually estimated to be $128 per year. As with all projections, there is a chance these numbers may change slightly and with the current tax rate, these are considered high estimates. The ballot language describing the higher tax amount is required per Utah code 11-14-206. The code mandates specific phrasing be used concerning property taxes without regard to outstanding bonds that will reduce over time.

Myth 3: Impact fees can be charged on new developments to generate funds for schools.

Fact 3: Utah Code 11-36a-206 titled "Prohibition of school impact fees" was implemented on March 21, 1995. It prevents any such fees from being collected for recouping the costs necessitated by and attributable to new developments. It would take a legislative act to change this law.

Myth 4: New home owners should be the only ones charged for new schools needed due to growth.

Fact 4: Property taxes are not segregated between new homes versus old homes. They are only separated as to residential or business properties.

Myth 5: Building a bigger high school is a better option.

Fact 5: The cost to build a high school big enough to hold 4,000 students is nearly $225 million (125% more than the one being proposed). It would be more costly than the currently proposed high school, junior high, elementary school and security upgrades combined. The requested bond amount would need to be raised to $305 million. However, per the Utah Constitution Article XIV, Section 4-1-b “No city, town, school district, or other municipal corporation, may become indebted to an amount, including existing indebtedness, exceeding four per centum of the value of the taxable property therein.” The school district is not allowed to go into debt in an amount exceeding four percent of the taxable value of the county. A bigger high school would not only cost more for the taxpayer overall, it would also take longer to build due to how the bonds would need to be distributed in order to not exceed the four percent of the taxable value of the county.

Myth 6: Portable classrooms could be used to house all the expected influx of students.

Fact 7: The District has a 10-year Master Facilities Capital Management Plan. Anticipating future growth is why funds from a 2015 school bond were used to purchase property for a new high school in the Overlake area of Tooele and a junior high in the Stansbury Park area. The existing 10-year plan ranges from 2014-2024. It considers enrollment projections, current district facilities, fiscal capacities, debts and more. The plan is consistently reviewed. Most of the projects in the 10-year plan have already been completed. The school district will start another 10-year plan once the three schools proposed in the 2019 Bond are complete.

Myth 8: The district is withholding itemized lists of the building costs.

Fact 8: The general budgets for the three proposed buildings are available online at www.TooeleSchools.org.More specific details about building costs will not be available until after the bond is approved and construction bids come in.

Fact 9: The school district has not taken any bids for the proposed bond projects. This will not occur until after a bond is approved. If the bond is approved, a Request for Proposal will be open to any company that wishes to bid on the project. The Utah Division of Purchasing and General Services is a public website where bidding occurs. Utah’s procurement process is found in the Utah Procurement Code (63G-6a- Utah Code Annotated). Specific rules governing procurement have been established by the Utah Procurement Policy Board and may be found within the Utah Administrative Code (Section R33).

Myth 10: Because the referendum is written in general terms, there is a “trojan horse” hiding in the midst.